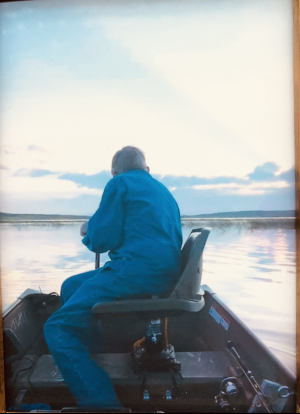 Donald “Don” Ray Jenkins, 80 years of age, of Ogallala, went to be with the Lord on Sunday, August 22, 2021 at Perkins County Hospital in Grant, Nebraska.  Don was born March 16, 1941, in Manhattan, Kansas.  He was the first of seven children, born to Donald and Edna (Latschar) Jenkins.  He graduated from Bunker Hill High School in Kansas, graduating with the class of 1958.  He attended Omaha Baptist Bible College from 1958 to 1960.  It was there that he met the love of his life.

On March 18, 1962, he was united in marriage to Doris Petersen at the First Baptist Church in Walnut, Iowa.  In 2022, they would have celebrated their 60th wedding anniversary.  Their union was blessed with five children:  John, Mark, Brian, Jill, and Julie.

Being a jack of all trades, Don worked in many different positions.  His longest stint, being with Regier Land Improvement for 27 years – where he specialized in heavy equipment operation.  He spent some time as a business owner, running “The Lamp Stand” – a popular coffee shop / Christian bookstore in downtown Ogallala.  Most recently, he worked in retail for True Value and Bomgaars.

Don was a member of the Berean Church of Ogallala for many years.  There, he served on boards, as an adult Sunday School teacher, and a leader of Bible studies groups.  But he was most proud of the 37 years that he served leading and directing the church choir.

Aside from work and church, Don loved spending time with family and enjoyed fishing.  He was most blessed when he was doing both – going on fishing or boating excursions with his family at every opportunity.  In addition, he was also a very talented artist – working over the years with paint, stained glass, and most recently, beautiful wood working.

Visitation will be held on Thursday, August 26, from 9am – 6pm, with the family greeting from 4-6pm, at Draucker Funeral Home in Ogallala.

Internment in the Ogallala Cemetery following the service.

Services may be watched via live stream from our website by clicking the Watch Live button at the time of the service,  or from  New Hope Church of Ogalla's website.

We will post a recorded copy of the service soon after the service has ended. This update will be posted to Facebook for your convenience.

Draucker Funeral Home of Ogallala is has been entrusted with arrangements.