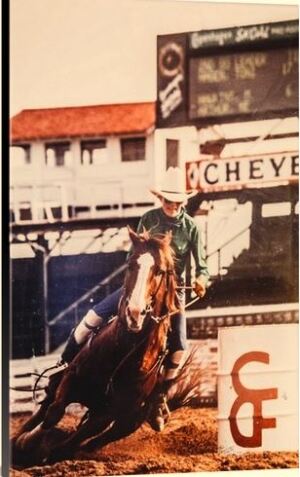 She was the first of three children, readily admitting being the mastermind of the three siblings. Whether it was teaching their dog to pull a dynamite box outfitted with wheels, entertaining company by stuffing a tomcat headfirst into a stovepipe for surgery, or to go swimming at a windmill while out on their twenty-mile circle on hot summer days Margaret led the way. One of her biggest delights was when her feet quit growing, and she could have a pair of boots for every day and a pair of boots for dress up.

During her childhood, she developed a deep appreciation and love for the land and trees. Planting trees beside her father would imprint Margaret for her life, remembering every spring the need to plant cedar, cottonwood, and mulberry trees.

Graduating in 1947 from Maywood High School, Margaret shared how sick her dad was the year before her graduation. He wanted her to quit school and come home and run the ranch. Choosing to finish high school, she packed her only jersey dress that didn't wrinkle, then rode her horse to town to live with Grandma Chamberlain. Unfortunately, Margaret lost her father to stomach cancer two months short of her turning seventeen years old. Nevertheless, she had an innate desire for learning from an early age, telling stories of how she borrowed books, carrying them home on horseback, only to return soon afterward for more reading material. Her reading ranged from the breeding and training of horses, health care, current, and world events, to the scientific formation of the earth. Learning by reading allowed Margaret to have informed opinions on topics in discussions.

After high school, Margaret went back home to help on the family ranch. Her days started at daylight, breeding mares, mowing hay, digging post holes, and checking water. During this time in her life, she learned to dance the Schottische, Waltz, Polka, and Square Dance. Her Uncle George Knolls, was upset with her one day for being able to dig more post holes than himself. Later he learned she did not want to miss the local dance with Hadley Barrett's band. She wore heels and a dress, fashioning her belt out of scrap leather and the buckle from a windmill fan section.

At Waldo Haythorn's branding in the late 1950s, Margaret was vaccinating calves on one side of the branding fire and Virgil Hawkins on the other side. Many airplane adventures, with Virgil piloting and landing at her family's Figure 2 ranch south of North Platte. Flying lessons with Don Brown required a hired kid to take Margaret's place in the hayfield.

When they got married, she said there was “a lot of speculation." On December 26, 1960, the couple flew Virgil's plane to Lodgepole, Nebraska, then drove to Chappell, the county seat, and were married at the local church with Virgil's brother Ralph and wife Ardis in attendance. Upon their return, Don and Ruth Brown met the couple with a bottle of pink champagne. Everyone had a glass, and Margaret asked Don if champagne was intoxicating, to which Don replied, "My goodness, no." Margaret said she sat up in the front of the plane, "On high alert not to make a damn fool of myself."

It was a long flight to Tulsa. Margaret and Virgil honeymooned with Don and Ruth Brown and their two kids in Mexico after bad weather changed their plans to visit New Orleans.

The couple returned home to Waldo Haythorn's wedding gift. Waldo had sent a man with a cat to lower the cut thru 'Sneedy Hill' so Margaret could drive her car and bumper pull horse trailer to the V.S. Hawkins Ranch. This deed was the first of many kind things Waldo did for Margaret over their lifetime as neighbors. Margaret shared that through the years, she received absolutely priceless advice from Waldo. He suggested, "she do the best she could do in the day and let the cows care for themselves at night." Waldo and Beldora’s friendship had a great influence on Margaret’s life. Margaret considered Beldora to be “the epitome of a lady.” Beldora taught her life lessons on how to match colors from clothing to interior design of the home.

Margaret and Virgil were blessed with two children: Virgilene, born November 23, 1961, and James on May 14, 1968. When Virgil passed away on a June day, Margaret continued ranching, flying, building an indoor arena to improve her horses and barrel racing. She researched the latest racehorse speed indexes in search of a faster horse. Margaret took intense pleasure in studying horse pedigrees, dressage principles, barrel racing techniques, and natural horsemanship. In the spring, she could be found making a spin first thing in the morning to check on the mares to see if a new baby colt or filly had arrived. When asked the new arrivals color, her response would be: "The right color!" Those who knew Margaret knew the right color was sorrel with four white feet and a blazed face. She was known for the uniformity she cultivated within her horse herd.

Margaret's mother had "bushels of good common sense and the ability to weather through thick and thin." Mrs. Chamberlain dressed chickens for money to purchase electric appliances when electricity came to the ranch in the early 1950s. That way, she did not have to dip into the cattle money needed for the ranch. Margaret remembered the lessons in her family. With a bit of luck and her neighbor's help, she was on her way to doing her part. She traded land to expand, and taught her children how to run the ranch.

Margaret found herself the subject of numerous news reports and photographers because of her love of horses and barrel racing. In January 2009, Western Horseman noted that she finished fourth in the barrel racing average at the Cheyenne Frontier Days Rodeo on Tiger Brasilius when she was in her 60's. "Her horse was incredibly smart and smooth, the best cow horse she ever rode", Margaret said.  Speed Horse Magazine wrote of her riding talents also. She joked that she "had to wait until the young age of 69 to be a cover girl" when photographer Peter Miller pictured her on the cover of the People of the Great Plains in 1996. She told Miller, "I'll ride as long as I can crawl to the barn. I love horses. Some people ride naturally, some study it, but we all have to work on it, and that takes a lifetime.  I have a horse whose biggest delight is putting cattle in their place." Later in the article, she said, "From riding, there is a good feeling between man, nature, and God. As I get older and face some tragedies, I think about that. I get up every day and bless the Lord.  I can't think of living a better life. I have a special feeling for the land."

After surviving being bucked off a horse and having eight broken ribs plated, spending six weeks and four days in the Scottsbluff hospital. Margaret, a person of deep faith, still was a firm believer in being thankful and found herself the closest to God when riding the sand hills on the ranch. She prayed for her friends suffering from illness; continually reminding those around her to pray and be thankful for all blessings.

Grandchildren were fascinating for Margaret to watch their strengths and talents develop—often suggesting that her children buy tools instead of toys for gifts. Margaret's father believed, "You should learn to like to work. It will be a source of the greatest pleasure in your life." Margaret said she had to get older before she appreciated the magnitude of her father's statement.

Margaret’s love for the land was inborn, she nourished trees and future generations of the family in her life. Margaret spent her last hours with her children and grandchildren by her side.